Al O’Connell is the newly hired youth director at First Lutheran Church and a new alumnus of Concordia College. He dual majored in Philosophy and Religion while doing research on contemporary worship and pragmatist theory. He founded and held the position of president for the Cobbers in Action, Concordia’s largest service-oriented student organization which has accumulated thousands of community service hours from 2017-2021 and earned several on and off campus awards for civic engagement. In 2018 he was elected to Interfaith Scholar at Concordia and established key relationships between faith communities to promote a common action for the common good.

Al was previously employed by Radio FM Media as a part-time radio DJ on Q105.1 Rocks (nickname Pineapple), The Toasted Frog in Downtown Fargo (top Fried Cheesy Pickles salesman from 2017-2021). He is currently serving as a Chaplains Candidate for the 142nd Engineer Battalion in the North Dakota Army National Guard until he finishes his Master of Divinity at Luther Seminary in St. Paul.

Al has joined on over 13 youth trips with Faith Lutheran in West Fargo holding responsibilities ranging from attendee to youth leader. Such trips have taken him to Chicago, Detroit, Omaha, Montana, South Dakota, and Wisconsin to accomplish theological and missional work. He was elected to the ELCA Youth Core Leadership Team in 2015 due to his passion for youth development which helped him discern his calling to vocational ministry. He likes church, what can you say. 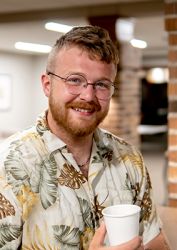